by Chris Layton
“Let us observe, that a religion that does not require the sacrifice of all things never has power sufficient to produce the faith necessary unto life and salvation; for, from the first existence of man, the faith necessary unto the enjoyment of life and salvation never could be obtained without the sacrifice of all earthly things” (6th Lecture on Faith)
Both my wife and I grew up in Mormonism having ancestry that were part of the restoration and being involved in polygamy. We had both read all of what was considered to be the standard works. Our upbringing lead us to do the things that we knew to be right. We were baptized, paid full tithes, attended our church meetings and fulfilled our callings which included fulfilling a mission call to Connecticut.
We both attended the temple as often as we could and our faith and desire for truth kept us on the path to where we are now. We both loved the things that we were taught and hoped to instill that same love of the gospel in our children.
I suppose that it was the temple where all the changes in our lives began and it was from this edifice that we have now journeyed to a place that has given us a greater view of God’s interaction with each of us in our lives as we pray for His direction. 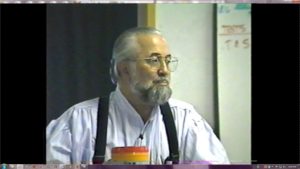 When we were introduced to the prophet James D Harmston in October 1997, we listened to him teach about the plan of salvation and exaltation in what was called “the Models”. It was in these models that we began to see to a greater extent the inner workings of the divine family in our behalf. We began to see as we were taught by the 6th lecture on faith that sacrifice was essential to please God and was the only means whereby we could in fact know that we were pleasing to Him, that the course we were pursuing was in fact pleasing in the sight of God.
If there was one thing that we knew more often in the gathering was the blessings associated with sacrifice and the importance of prayer. We were taught as Adam taught His children how to pray. This form of prayer, known as True Order of Prayer which we offered up each day dressed in our garments and robes of the Holy Priesthood was essential to forming a deeper relationship with God. We discovered as Brigham proclaimed that “Adam is our Father and God” and thus we were enabled to begin to comprehend the love of God and the means whereby we can become as He is, a son of God and a daughter of God respectively.
It is my witness and testimony that the prophet James was sent by God to bring once again the fulness of the gospel to the elect of God’s children. His witness and testimony of the Gospel has fed and enlightened me and my family for nearly 20 years and we will continue to study the scriptures and those things that he taught. He is God’s prophet and though he is gone his testimony is not forgotten and is now sealed and in force.

“And for this cause he is the mediator of the new testament, that by means of death, for the redemption of the transgressions that were under the first testament, they which are called might receive the promise of eternal inheritance. For where a testament is, there must also of necessity be the death of the testator. For a testament is of force after men are dead: otherwise it is of no strength at all while the testator liveth.”
(Hebrews 9:15-17)

What a rare blessing and privilege it was to be taught at his feet.